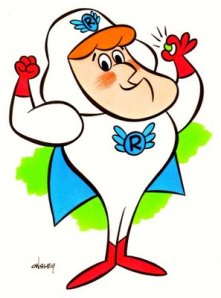 There is a fictitious guy I’d like to introduce you to. His name is Roger. He’s the guy who says, “Roger that” when there’s a problem. Roger doesn’t understand “no” or “impossible”. Roger is a can-do man. Roger wakes you up early in the morning. Roger says no to ego and fear. Roger gets the job done.

When it comes to business there are innumerable distractions, disappointments, especially personal ones. Roger will get you through. Roger is a decision you make to get there no matter what.

The proton pill that Roger Ramjet takes is the decision to adopt a Roger attitude today.